There are some 50 species of rhodiola, but it is the fragrant root of the species Rhodiola rosea that is used medicinally. Rhodiola rosea grows throughout the mountainous regions in the higher latitudes and elevations of the Northern hemisphere.

Rhodiola has long been used in traditional medicine, primarily in Russia and Scandinavia.1 The Vikings used rhodiola to enhance physical strength and endurance, and it was commonly used by many Northern peoples to treat fatigue, poor physical endurance, nervous system disorders, and infections, and to enhance fertility. Rhodiola was included in the first Swedish Pharmacopeia, and Dioscorides, the Greek physician, reported on its use in his treatise De Materia Medica. In middle Asia, rhodiola was considered a premier treatment for colds and flu during the severe winters that occur there.

There are numerous animal and test tube studies showing that rhodiola has both a stimulating and a sedating effect on the central nervous system (depending on intake amount); enhances physical endurance; improves thyroid, thymus, and adrenal function; protects the nervous system, heart, and liver; and has antioxidant and anticancer properties.2

Rhodiola has a more stimulating effect at lower amounts, and a more sedating effect at higher amounts. In medical treatment, the usual amounts taken are 200 to 600 mg per day of a standardized extract to at least 3% rosavins and 0.8 to 1% salidroside.3 The nonstandardized amount would be 1 gram three times daily of the root, the amount for the alcoholic extract (40% alcohol) is 5 to 40 drops two to three times per day (with a weight to volume ratio of 1:1 to 1:5 ). Rhodiola is usually taken before meals. 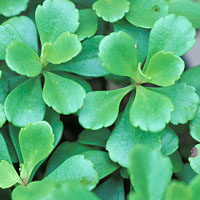