Dong quai is a member of the celery family. Greenish-white flowers bloom from May to August, and the plant is typically found growing in damp mountain ravines, meadows, river banks, and coastal areas. The root is used in herbal medicine.

Also known as dang-gui in Traditional Chinese Medicine (TCM), dong quai is sometimes referred to as the female ginseng. In Traditional Chinese Medicine, dong quai is often included in herbal combinations for abnormal menstruation, suppressed menstrual flow, dysmenorrhea (painful menstruation), and uterine bleeding. It is not used in TCM for treating symptoms associated with menopause, such as hot flashes. It is also used in TCM for both men and women with cardiovascular disease, including high blood pressure and problems with peripheral circulation.1

Traditionally, dong quai is believed to have a balancing or “adaptogenic” effect on the female hormonal system. Contrary to the opinion of some authors, dong quai does not qualify as a phytoestrogen and does not appear to have any hormone-like actions in the body. This is partially supported by a double-blind trial with menopausal women that found no estrogenic activity for the herb.2 In Traditional Chinese Medicine, dong quai is rarely used alone and is typically used in combination with herbs such as peony and ligusticum for conditions such as menstrual cramps.3

Dong quai has been traditionally used as a way to promote formation of red blood cells, an effect partially supported in a case study of a man with kidney failure who had a significant improvement in anemia due to dialysis while drinking a tea composed of dong quai and peony.4 No clinical trials have examined dong quai alone for this purpose, or for the treatment of other forms of anemia.

The powdered root can be used in capsules or tablets.5 Women may take 3–4 grams daily in three divided applications. Alternatively, 3–5 ml of tincture may be taken three times per day.

Certain medicines interact with this supplement.

What Are Drug Interactions
Types of interactions: Beneficial Adverse Check

The Drug-Nutrient Interactions table may not include every possible interaction. Taking medicines with meals, on an empty stomach, or with alcohol may influence their effects. For details, refer to the manufacturers’ package information as these are not covered in this table. If you take medications, always discuss the potential risks and benefits of adding a supplement with your doctor or pharmacist.

Dong quai may cause some fair-skinned people to become more sensitive to sunlight. People using it on a regular basis should limit prolonged exposure to the sun or other sources of ultraviolet radiation. Dong quai is not recommended for pregnant or breast-feeding women.6 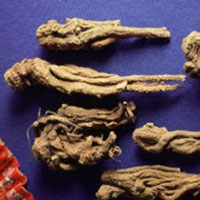