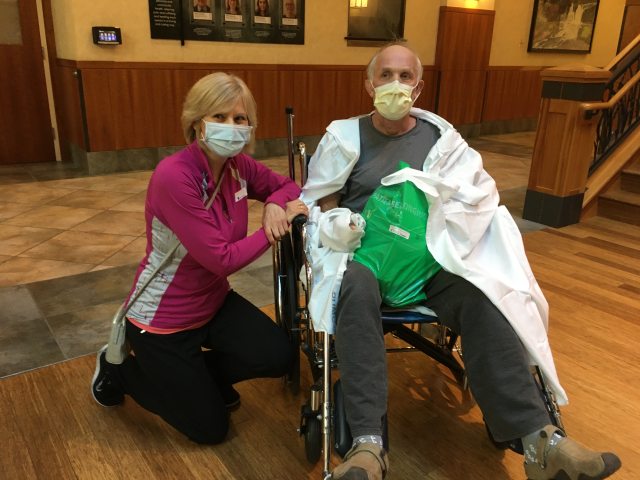 Defeating the coronavirus calls for special ways to mark the moment.

It’s a moment worth celebrating. Every. Single. Time. The moment a person leaves the hospital after defeating COVID-19. It’s certainly a battle and a victory worthy of the big screen.

For Petras Astrauskas, he may not have left PeaceHealth Sacred Heart Medical Center at RiverBend in Springfield, Ore., with a championship belt, but he was definitely celebrated as a champion.

To honor the hard-fought moment, and those involved in making it happen, caregivers called for a “Code Rocky” and wheeled him out to the “Rocky” theme song playing on the speakers overhead. Onlookers broke into cheers and applause as he passed by.

For Petras and his wife, Laima, it’s a moment they credit healthcare heroes for giving them.

“I took him into the emergency room and heroes here at the hospital saved him,” says Laima.

Petras, a 59-year old Eugene resident and Lithuanian native, says he’d hardly been sick in his life and had never been to a hospital until COVID-19 nearly claimed his life. On March 31, after a week of a low-grade fever and coughing, Petras suddenly couldn’t catch his breath and began feeling dizzy. He spent 16 days in the hospital – 12 of them in ICU on a ventilator.

Petras is a long-haul trucker and believes he picked up the virus during his travels.

The “Rocky” theme isn’t the only song being heard in PeaceHealth hospitals as a way to honor COVID-19 survivors:

As Petras left the hospital, he flashed a big thumbs up and said there were two things he was looking forward to upon returning home: a shower and a Corona beer.